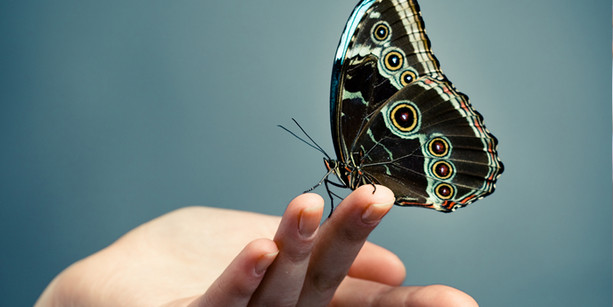 What is good therapy? Such a beguilingly simple question, yet I find that I can't answer this question without adding two words… "for me". I strongly believe that the personal is the professional, that the personal and the professional are the yin and yang of good practice, and so I want to invite you to accompany me on the journey I have made thus far in attempting to answer this question for myself, both as therapist and as client.

I began this journey with a traditional academic training as a psychologist, and was schooled in the theory and technique of Cognitive Behaviour Therapy. (We were allowed to refer to thoughts as long as we referred to them as 'internal behaviour'!)

What I learned from my early training, restrictive as it was, was that Good Therapy required a multi-modal approach, and requires us to pay attention to our clients' thoughts and behaviours, which mutually influence each other. I also learned from this training that Good Therapy requires us at times to help the client move through the swirling mists of generalisations to the clear plateaus of the specific. All journeys begin with a first step!

I quickly discovered that clients frequently expressed emotions, often, to my discomfort, very strong emotions, and that these emotions were not easily corralled by the techniques that I had learned so far. Many of these emotions didn't seem to me to be the result of "faulty" or "illogical" thinking, or of maladjusted behaviour, but seemed rather to be a completely appropriate response to the human condition. Convinced of the primary importance of working with emotions I sought training in Gestalt Therapy, and was greatly surprised to discover that I was required to work on my own issues as part of the training. Here I discovered the excitement and terror of therapy.

Gestalt Therapy taught me that Good Therapy happens in the present and pulsating "now". I also learned of the importance of cathartic release and of attending to the story of the body as well as of the mind. I experienced, rather than "learned", that Good Therapy is fully experiential in nature and far more than a cognitive process.

In my own therapy I learned much about my developmental woundings, and discovered many of the underlying reasons that had attracted me to my profession. I learned how discovering and acknowledging the personal motivation that had brought me to work as a therapist helped me ensure that those motivations didn't adversely intrude into my professional work.

As a result of my own early work as client I discovered that Good Therapy requires a therapist who is as committed to their own healing and growth as they are to assisting that of others.

In my work as client I also noticed how something in me resisted having my story told to me. Even when the therapist's interpretations were accurate and were communicated kindly, they were still his interpretations, and somehow emphasised the difference between me as confused and vulnerable client, and the therapist as whole and knowing expert. In my work as therapist I discovered that there were many times when I simply did not know what to do or say, and that when I learned to communicate this openly with my clients, they seemed to appreciate my honestly sharing my limitations and fallibility.

So I discovered that Good Therapy sometimes requires "hanging out" with not knowing and modelling a comfort with this fecund way of being.

Something about the language of an advertisement for a Michael White introductory workshop on Narrative Therapy really appealed to me, and so began the next important phase of my journey. I discovered how powerfully the dominant narratives or discourses of our culture and society shape the individual stories we tell about ourselves and each other, and how powerfully our individual stories shape our lived experience. The values of Narrative Therapy, which recognised the client as the expert on their own issues and which positioned the therapist as co-editor assisting clients to re-author the story of their lives, were really congruent with my own emerging values and beliefs. These experiences were gained both by training and then working for many years as a Narrative Therapist, and by furthering my own personal work as a client with a Narrative Therapist.

I learned from Narrative Therapy that Good Therapy pays attention to social, cultural and political contexts within which individual problems and dilemmas are experienced. I also learned that Good Therapy recognises, awakens and calls forth the expertise and wisdom that lies within the client.

And still I struggled. I began to experience the cynicism of burn-out. It seemed to me that no matter how I worked with people, what we were engaged in was assisting them to manage rather than to transform their inner processes. Even though this was often a successful endeavour, this management still required constant vigilance and energy, and, when a change in the client's internal or external environment resulted in distraction or lower energy levels, the old problematic ways of being re-asserted themselves. This was also my experience as client: even though I most often successfully managed the problematic in my life, my fundamental experience of self and the world hadn't really changed that much, and these unchanged "core beliefs" constantly threatened to re-invite me back into a limited way of being.

One fine day (literally!) a good friend and trusted colleague persuaded me to forgo a day of sailing to attend an introductory workshop on Hakomi Experiential Psychotherapy. I knew immediately that I had come home; home to myself and home to my professional practice. Here was a method that encapsulated and brought together all that I had valued in my various trainings over the past twenty years and that articulated a method that was as much about a way of being in the world (and being with clients) as it was about specific therapeutic techniques. Here was a method that embraced the wisdom of ancient eastern civilisations such as the wisdom of the Tao and the spiritual values of Buddhism, that used techniques such as Mindfulness, and that provided a coherent methodology that was supported by cutting-edge discoveries in western neuroscience. Hakomi, founded by Ron Kurtz, is a method that provides a unique synthesis of the work of Wilhelm Reich, Milton Erikson, Moshe Feldenkrais and Fritz Perls. It is a body-inclusive method that places a great deal of emphasis on developing the therapeutic relationship to support the experiential and organic unfolding of being that has been interrupted by developmental or traumatic events. I have learned and am learning my most important lessons about Good Therapy from Hakomi.

I suspect that what we know about Good Therapy is like the tip of an iceberg, perched on top of a vastness of unknowing. What I do know is that when I do Good Therapy I experience the energising flow of self-renewal that comes from the sacred privilege of truly meeting another human being. I have offered you some ideas about my experience of what makes therapy good for me, both as client and therapist, in the hope that it may stimulate you to think about what makes Good Therapy for you. In so doing my wish for you is that you resist the homogenising imperatives of "evidence-based practice" and that you bring the rich abundance of who you are to the centre of your practice.