The End of Time

Do you have enough time to talk about time? 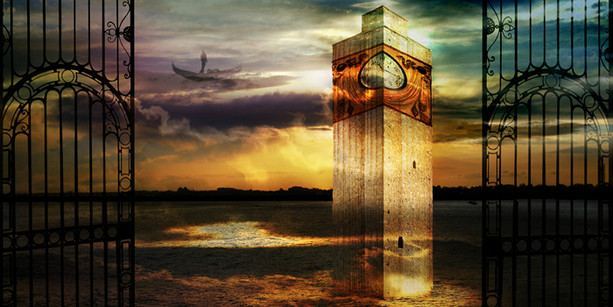 This theme of running out of time dominates our modern time, wouldn’t you agree? How are we to understand it? How can we run out of time? Yet this is what we say: “I don’t have time; I need more time; time is running out; there’s a dead line; we all don’t have much time left; there’s not enough time to save ourselves; it will all end in 2012” (or some other end date). A movie came out recently (In Time, 2011) that even exploits this theme:

By the year 2169, genetic alteration has allowed humanity to stop aging at 25. "Living time," which can be transferred among individuals on body contact, is displayed on a clock implanted in people's forearms. When this clock reaches zero, one dies instantly. We all use temporal language quite easily and quite unthinkingly. Words like when, before, afterwards, until, never, hope, intend, anticipate, dread, regret, remorse, nostalgic, are just some of the words we use to designate our immersion in time. English has an amazing subtlety in its verb forms to distinguish actions in time. “I was at the party” and “I had been at the party” suggest quite different time meanings: I was at the party and now I am at home (i.e. action in the present) vs. I was at the party before I went home (i.e. action still in the past). We can even talk about hypothetical past or future actions in time: “I would go to the party if somebody could drive me there”. Amazing subtlety! How about this complex thought about time: “I will have gone shopping by next Saturday!” The speaker is imaginatively locating herself in the future (next Saturday) and then talks about an action that temporally precedes that point of time in the future. Impressive!

So we can speak in temporal terms quite easily but when it comes to talking about time, trying to reflect on time itself, things get difficult. Let’s start with our modern sense of time, our common experience of time. We could call it Clock time or Mechanical time, for historical reasons. This time, as we all know, runs on independently of what you and I may say, think, or feel. Whatever mental states we are in we know that time goes on, at its own pace. This time is apparently independent of our psychology. We also talk of subjectively experienced time such as when reading a good book, time seems to pass quickly. But we are not fooled. We know that real Time, that is, Clock time, has passed at the same rate and that we were simply psychologically immersed in whatever activity we are doing, like reading. From this example we can draw a distinction. There appears to be quantitative time and qualitative time. Quantitative time is our Clock time, the time that governs our modern lives. This objective time is quantified by numbers—that’s it! Military Time is the most extreme form of this quantification: 0300 does not even include day or night (like 3AM does) which could be said to have qualities. Qualitative time is what we also call subjective time—our private experience of time passing slowly, being squeezed by time, losing time, etc. There is a clear difference in our current attitude towards these forms of time: Quantitative time is the real time, the objective time and qualitative time is merely subjective, a feeling we have that passes. When it comes to determining our real conduct in the world, we naturally turn to real time, i.e. Clock time, the objective, quantitative time.

Was it always this way?

There is a very interesting book, a work of fiction that is based on some good research into our past. The book is Umberto Eco’s The Name of the Rose. As well as being a gripping detective novel, it is also a study of monastic life in the 14th century. It portrays the historical moment when we were just beginning to distinguish quantitative measurement from qualitative description, on the way to developing the scientific mind. So, for example, a murder investigation looking for clues etc. was thoroughly confused with biblical Revelation and all the terrors of the end of the world. Eco developed his book from the structure of time that was operating in the 14th century i.e. the real time that governed the real lives of the monks and everybody else around them in the community. Here is how it worked:

The working day of the monks was structured by different times. They were: Prime, Terce, Sext, Nones, Vespers, and Compline. The important thing to note for our discussion is that each time was a qualitative time and the qualities of each time belonged to that time, not to the subjective experience of each monk. There was no Clock time! Each time was marked by a bell. Terce for example was that time shortly before daybreak when the monks went to choir, to recite hymns, psalms, verses, and the “Kyrie”. How different was the time of Terce from that of Compline in which the monks were asked simply to examine their conscience and seek acts of repentance (private prayer etc.), and during which the whole community, including guests, observes silence throughout the night until the morning service the next day!

From this example we can see some rather startling facts. We regard qualitative time as merely subjective, i.e. a purely psychological matter, within each of us. The 14th century monks, on the other hand, regarded qualitative time also as subjective but the subject having those qualities were the times themselves, not the monks. These times as we see even had names, like persons. They were intelligences, i.e., subjects! The monks lived in these different qualitative times throughout the day, themselves being objects determined by these subjects or intelligences. Each time came into being with a bell, rose into ascendancy, taking the monks with it, and expired, like a rose coming into bloom and then dying naturally. Each of these times was a living present that permeated and determined the monks’ existence, their thoughts, feelings, and actions for as long as it lasted, the bell signaling its death. The monks would then move on to another time, another present with its own unique qualities.

Are there any signs today that we are under the sway of a time that bears its own qualities, perhaps even deserving of its own name, like Nones, or Vespers—a time that determines our thoughts, feelings and actions, like the monks of the 14th century, and like Clock time today does with us? If there is, this time would have to compete with Clock time in terms of its reality and determination of our modern existence. I think there is such a qualitative time today. It can be sensed through our worldwide complaint of “running out of time” or “not having enough time.” I do not think it is accurate to say that this sense of time is subjective, i.e. within each of us psychologically. We just don’t experience it that way. It is a worldwide complaint about time i.e. objective time. Although clocks are still running at the same rate (Clock time), we no longer seem to be determined by this kind of time. Rather we are getting increasingly determined in our thoughts, feelings, and actions, by the growing conviction that we are objectively running out of time. When we experience our subjective sense of time, say as in reading a book and find that time seems to pass quickly, we can always put the book down and return to real time, i.e., Clock time. This is not so with our growing experience of running out of time. We can’t get out of it back into Clock time. Quite the contrary, this “running out of time” time is increasing its hold over us, producing anxiety, stress, alarm calls about the end of time, and so on. We could even call stress not a psychological or physical problem but a time disease! Time is objectively running out!

What could this mean?

As I said the worldwide tendency is to regard this fact as a literal one speaking to the end of Clock time, i.e., the end of the world. We have seen so many end dates now that I have lost count and yet when the end date passes, we simply insert the next one. So, today we have Dec. 12, 2012. What will come after that? The problem with this way of thinking about “running out of time” is that we are still tied to Clock time as the only objectively real time and thus the end of time can only mean that the clock stops—boom! We need another way to think about this world wide phenomenon of "running out of time". I suspect we are being initiated back into qualitative time again as an objective qualitative fact. Since the Scientific Revolution we have come to understand that quantity belongs on the outside and is objective, while quality belongs on the inside (within the perceiver) and is thus “merely” subjective.

I think this pair of opposites (objective-subjective) is undergoing a revolution, catching us up in the process. We have to learn to think about time in a new way. I believe we have to think about time as qualitative, as the 14th century monks did, but also, in some sense, as objective, like Clock time. Quality is being returned to the world as an objective fact. Up to the present time, qualities have been thought as belonging to us, within us. This has led to a world that has been denuded of quality altogether, simply now a world that can be quantitatively measured, and exploited. I strongly suspect that our worldwide experience of “running out of time” is forcing us to comprehend time as a quality, an intelligence, that is objective, “in the world” in some sense. I think this revolution in time is a hint of what is to come. Other qualities, not only time qualities, formerly held to be only within us human beings, are showing up “in the world”, as expressed in language, new language that we may not be quite aware of at this point. I think we are experiencing a revolution indeed, one in which the world, for so long denuded of qualities that impart richness, depth and texture to our existence is regaining its objective-subjectivity, its living intelligence, and taking us with
it in the process.

Can we listen to these hints in the right way?