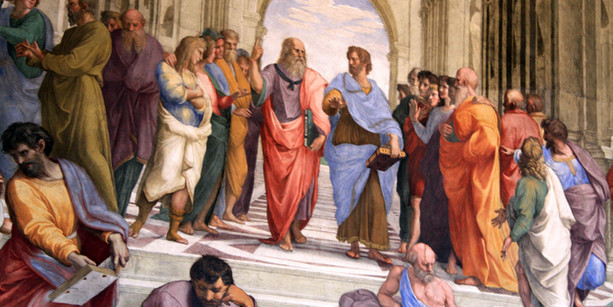 Psychodrama was pioneered by J.L. Moreno, who got his ideas from watching children playing in the park in Vienna. "Psychodrama is a method of psychotherapy in which clients are encouraged to continue and complete their actions through dramatisation, role playing, and dramatic self-presentation, both verbal and nonverbal communications are utilised...Many techniques are employed, such as role reversal, doubling, mirroring, concreting, maximising, and soliloquy. Usually the phases of warm up, action, working through, closure and sharing can be identified.

Drama Therapy, on the other hand, is generally considered to be a subset of Psychodrama. It generally refers to the more "generic" (and this is not meant in a negative way) group dramatic scenarios, such as the "Family dinner." Where psychodrama creates and presents dramas that are shaped by an individual's unique experience, drama therapy shows how within an archetypal scene, we each come with our own stories, our own beliefs, our own desires.

Drama therapy is defined by the National Association for Drama Therapy as "the systematic and intentional use of drama/theatre processes, products, and associations to achieve the therapeutic goals of symptom relief, emotional and physical integration and personal growth." Drama therapy is an active approach that helps the client tell his or her story to solve a problem, achieve a catharsis, extend the depth and breadth of inner experience, understand the meaning of images, and strengthen the ability to observe personal roles while increasing flexibility between roles.

Psychodrama, as a method is frequently used in treatment settings. Role playing can aid in releasing strong emotions, transport us into altered realities and promote deep healing well beyond the scope of talk therapy. But it is essential that this power is used carefully, competently and responsibly. Without ethical use, there are risks of re-traumatising the client and contaminating group dynamics and trust.

Helpers using psychodramatic techniques should have training that provides the knowledge of the history of action methods as well as sociometry, role theory and the warm-up process. It is also important to know the human developmental stages and the clinical knowledge of the problems they want to address in the use of a particular technique or directive.

People who have suffered trauma are especially vulnerable to re-dramatisation by ill-used techniques. Without skillful use and knowledge of the theory behind the techniques, these techniques can awaken body memories, forgotten experiences and dissociated trauma that the person has buried in the unconscious.

These points are essential to keep in mind: