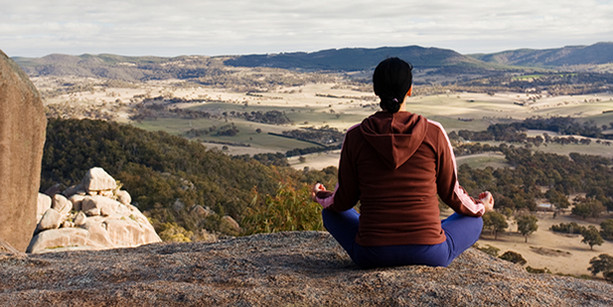 Meditation is an activity that calms the mind and keeps it focused on the present. In the meditative state, the mind is not cluttered with thoughts or memories of the past, nor is it concerned with future events.

Meditation, which has been practiced for thousands of years, is an effective means of treating stress and managing pain. There are hundreds of meditation techniques, most of which fall into one of two categories: concentrative and mindfulness. During concentrative meditation, attention is focused on a single sound, an object or one's breath, to bring about a calm, tranquil mind. During mindfulness meditation, the mind becomes aware of but does not react to the wide variety of sensations, feelings, and images tied in with a current activity. Much research has been done on transcendental meditation (TM). TM brings about a state of deep relaxation in which the body is totally at rest, but the mind is highly alert.

Meditation relies on the body's ability to switch to an alpha (resting) or theta (relaxing) brain-wave state, during which the brain's rhythm slows appreciably, and endorphins, the body's natural painkillers, are released. Studies have shown that during meditation, metabolism is lowered, resulting in a slower heart rate, decreased blood pressure, and slower breathing. In the seventies, Dr. Herbert Benson, a cardiologist at the Harvard Medical School, formulated the theory of an inborn "relaxation response" that can be cultivated to counteract stress. Eliciting it, he wrote, "can help counteract the effects of repeated insults of stress on the heart and other organs."

The experience of Transcendental Consciousness develops the individual's latent creative potential while dissolving accumulated stress and fatigue through the deep rest gained during the practice. This experience enlivens creativity, dynamism, orderliness, and organising power in one's awareness, which results in increasing effectiveness and success in daily life. In the past four decades the Transcendental Meditation program has been learned by over four million people of all cultures, religions, and educational backgrounds worldwide. It has been implemented in universities and schools in many countries, including Maharishi University of Management in the U.S.A. and Maharishi Schools of the Age of Enlightenment.

Concentrative Meditation
One simple, common technique involves sitting or lying comfortably in a quiet environment, closing your eyes, and focusing attention on your breath as you inhale through your nose for a count of three, then exhale through your mouth for a count of five. This focus on your breathing rhythm-slow, deep, regular breaths-allows your mind to become tranquil and aware.

Mindfulness Meditation
By sitting quietly and allowing the images of your surroundings to pass through your mind without reacting to or becoming involved with them, you can attain a calm state of mind.

Studies show that meditation, especially TM, is effective in controlling anxiety, enhancing the immune system, and reducing conditions such as high blood pressure. Meditation has also been used successfully to treat chronic pain and to control substance abuse. In addition, it can benefit those who have heart disease and/or hypertension. It improves exercise tolerance in CAD clients, reduces stress-related hormones, and also reduces obesity. Meditation increases Basel Skin Resistance, decreases minute ventilation, and increases the regularity and intensity of EEG Alpha Activity (according to the results of the American Journal of Physiology, 1971).