How many friends does one person need? 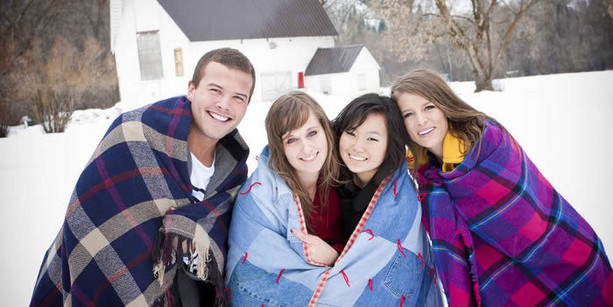 My idea of friendship has changed considerably since leaving school. In primary school friendships started because you were in the same class as someone or you lived in the same neighbourhood or you were family friends. In high school, this idea of friendship evolved into being a group of people who were not only close in proximity but people who you identified with and had similarities to. You formed exclusive friendships with one or two people you considered your ‘best friends’. I had one friend in particular who I considered my ‘best friend’. We had most classes together during years 11 and 12, spent recess and lunch together and then, even after spending close to 8 hours together during the day we would get on the phone at night and spend another couple of hours talking. We’d talk about boys, school, what we did the last weekend and what our plans were for the next weekend.

After high school finished, we started to travel down different paths until eventually we grew apart and stopped talking. That’s when my idea of friendship began to change. Was our friendship situational? Did we have a deep connection or were we just friends because we spent so much time together and it was comfortable? Since that time I have maintained friendships with other friends from high school who now form part of my intimate friendship group. But as life as an adult would have it we have different work schedules, independent commitments and developed significant relationships with other people. As such, we’re lucky to meet up 2 or 3 times a month. While we enjoy each other’s company and we have been friends for so long I am often reminded of my idea of friendship from school. Do we see and talk to each other enough to consider each other close friends? Do you have to see friends often to call them friends? As I have gone back to uni recently I see my university peers more often than I see my close friends. We catch up 2 or 3 times a week (rather than 2 or 3 times a month), share ideas and experiences. Have these people who I have been friends with less than a year become my new close friends? Is time the only factor that distinguishes them from my other friends? Can you be closer to someone you’ve met recently than to people you’ve known for years?

Returning to my initial impression about being Facebook friends, I believe the evolution of technology and social media has also forced the concept of friendship to evolve. Instead of friendships developing naturally by meeting someone, finding common ground and spending more and more time together we now ask ‘do you mind if I add you on Facebook?’. Physical presence and engaging in conversation are no longer a necessary part of the process. And, because the intimacy that develops between people in physical contact is disconnected it is easier to call someone your Facebook friend than your true friend.

Psychological research has suggested we can only maintain 150 friends at any given time before the quality of relationships begins to diminish (How Many Friends Does One Person Need?, Dunbar, 2010). This is because friendship is based around mutual trust and reciprocity. So then if you have more than 150 friends on Facebook, what does it actually mean to be Facebook friends? For me, there are a number of answers to this question. Many of my ‘friends’ on Facebook are actually family and while you can think of family as your friends I don’t think Dunbar had this in mind when he developed this vital number. A number of my friends are professional and University connections, people I believe have the potential to be mutually beneficial in any future projects or ideas. Another group are people I have been close to at some point in my life who, although our conversations are presently few and far between, could once again become an integral figure in my life.

Another friend of mine has a perspective on friendship that differs to mine, but is no less valid, as the majority of her relationships are formed and maintained online through gaming networks. Although she may not have physical contact with them does it make them any less real friends? Her friendships satisfy all components of being a friend, that is, they spend time together, experience new things together, regularly engage in conversation and have mutual trust and reciprocity. The only factor differencing them from my friendships is their meeting place is the internet. Does reality then determine friendships? Can you only be friends with someone who you see in person? For this friend, making friends online is an easier alternative for a self-confessed introvert to socialise and satisfy the innate human desire to be close to others. She feels just as comfortable with them as she does with us, her outside world friends.

Friends are in your life for different reasons. Every friend you have plays a specific role and no two friends will satisfy the same purpose. My friend has enlightened my view of friendship and expanded it to encompass different realities. I also know that change is the only constant and my idea of friendship will undoubtedly change again in the future. Those friendships I now consider close may wane but I know there will always be close friends.