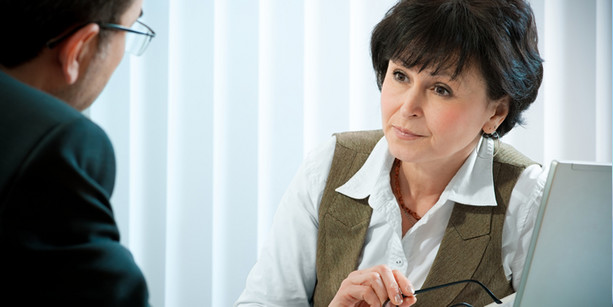 The central insight of cognitive therapy as originally formulated over three decades ago is that thoughts mediate between stimuli, such as external events, and emotions. As in the figure below, a stimulus elicits a thought -- which might be an evaluative judgement of some kind -- which in turn gives rise to an emotion. In other words, it is not the stimulus itself which somehow elicits an emotional response directly, but our evaluation of or thought about that stimulus. Two ancillary assumptions underpin the approach of the cognitive therapist: 1) the client is capable of becoming aware of his or her own thoughts and of changing them, and 2) sometimes the thoughts elicited by stimuli distort or otherwise fail to reflect reality accurately.

A common 'everyday example' of alternative thoughts and beliefs about the same experience and their resulting emotions might be the case of an individual being turned down for a job. She might believe that she was passed over for the job because she was fundamentally incompetent. In that case, she might well become depressed, and she might be less likely to apply for similar jobs in the future. If, on the other hand, she believed that she was passed over because the field of candidates was exceptionally strong, she might feel disappointed but not depressed, and the experience wouldn't dissuade her from applying for other similar jobs.

Cognitive therapy suggests that psychological distress is caused by distorted thoughts about stimuli giving rise to distressed emotions. The theory is particularly well developed (and empirically supported) in the case of depression, where clients frequently experience unduly negative thoughts which arise automatically even in response to stimuli which might otherwise be experienced as positive.

Usually cognitive therapeutic work is informed by an awareness of the role of the client's behaviour as well (thus the term 'cognitive behavioural therapy', or CBT). The task of cognitive therapy or CBT is partly to understand how the three components of emotions, behaviours and thoughts interrelate, and how they may be influenced by external stimuli - including events which may have occurred early in the client's life.

Cognitive therapy aims to help the client become aware of thought distortions and behavioural patterns that cause psychological distress, and to correct them. The objective is not to correct every distortion in a client's entire outlook - and after all, virtually everyone distorts reality in many ways - just those which may be at the root of distress. The therapist will make every effort to understand experiences from the client's point of view, and the client and therapist will work collaboratively exploring the client's thoughts, assumptions and inferences. The therapist helps the client learn to test these by checking them against reality and against other assumptions.

Often this process will continue outside the therapeutic session. For instance, a client whose fear of dying in a car crash is causing them great anxiety when it comes time to drive to work might record on a slip of paper their estimate of the odds of dying in a car crash at various points in the morning - when they first get up, when they are nearly ready to leave the house, when they are almost to the car, and when they are actually driving. (For someone experiencing such anxiety, these odds might go something like: 1,000 to 1 against when first getting up; 20 to 1 against when nearly ready to leave the house; 2 to 1 against when almost to the car; 5 to 1 in favour of dying in a car crash when actually driving.) This can help the client to see that their estimated odds of actually dying in a car crash are changing just as they move about the house and complete the morning routine. This can be the first step toward making those estimates more realistic and reducing the anxiety, which accompanies the thought that one is very likely to die in a crash while driving.

Because of the interrelationship between thoughts, feelings and behaviours, therapeutic interventions frequently involve the client's behaviour. For instance, a client with a strong fear that spider will jump onto their head if they walk under trees may go to great lengths to avoid walking under trees. This behaviour will prevent the client from acquiring information that contradicts their thought that "if I walk under a tree, a spider will jump onto my head" or perhaps their mental image of a spider jumping onto their head the moment they step under a tree. The therapist may help the client to overcome this avoidance of walking under trees as part of the process of correcting the distorted thought that walking under trees will lead to spiders jumping on the client's head.

Throughout this process of learning, exploring and testing, the client acquires coping strategies as well as improved skills of awareness, introspection and evaluation. This enables them to manage the process on their own in the future, reducing their reliance on the therapist and reducing the likelihood of experiencing a relapse.

Published with permission from CounsellingResource.com